Saturday was a lazy day for me! I even bought some wine that fit my mood for the day!

I needed it, because Friday was busy, and I have to be up early to work for my boss on Sunday morning — and then work my shift on Sunday night — so I’m feeling busy, and wanted to rest up a bit!

I rolled out of bed at some point in the afternoon, and got ready — and Hatchet and I brought dinner to the boyfriend and his crew at work, giving them a puppy break since they have to work all weekend 😦

THANKFULLY, the heat wave has FINALLY been broken, and our A/Cs were turned off Saturday evening, and the windows are back open!

Grocery shopping was done late Saturday evening, and I was in a rush. I chose (poorly) to head to Trader Joe’s because I NEEDED more of this Hummus (Dairy Free!!!) Salad Dressing I tried out this weekend. 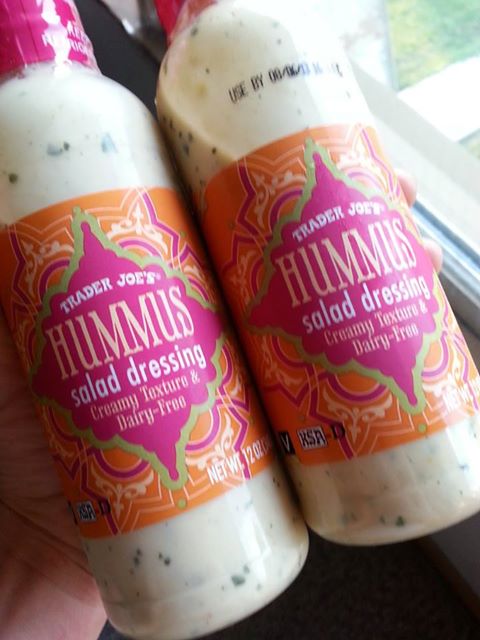 Sadly, the intersection that leads me directly to Trader Joe’s from my house (one road involved) has been closed down — and will remain closed down through the end of the month!!!

Thus, I had to take a detour.

Then, I got lost, in the city I live in trying to find the second grocery store I needed to stop at!

But alas, it all got done, as it does!

Preps for next week’s meals began later than I would have liked on Saturday night.

I’m keeping things simple for next week. I’ve decided I need to eat more greens — and have decided to make a green smoothie for lunch — eating that with some black forest bacon from Trader Joe’s and some raw/grass-fed cheese.

The green smoothie will contain fruit (I have banana, blueberries, apples, Valencia oranges), spinach, avocado?, and Greek yogurt — with some cinnamon if I have enough!

GET THE RECIPE via TwoPeasAndTheirPod.com!

On Saturday night, I baked the black forest bacon in the oven.

It’s black forest bacon, and I like mine a little crispier than most — so if this looks burnt to you, remember that it’s still bacon 🙂

The green smoothie will be made the morning of.

For dinner next week, I’m making a giant salad. I got bagged salad from Trader Joe’s, containing spinach, pecans, blue cheese — and I will be adding sun dried tomatoes and some green onions that I have on hand. I will be serving this up with Trader Joe’s Hummus Dressing, which is my new obsession!

It will look like THIS salad from Friday night!

For dinner, I’m also planning on rolling up some veggie sushi! This will be PALEO SUSHI, because instead of rice, I’m using roasted red pepper hummus! Brilliant right?

It would’ve been better had I made my own, homemade hummus, BUT I am still without a food processor 😦

Saturday night, I chopped up some cucumber and carrots. I also plan on stuffing the sushi with avocado, wrapping it in Nori wraps.

GET THE RECIPE via CookBakeNibble.com!

A nice, healthy week of meals planned with minimal cooking! After this hot week, it was nice to have a relatively low cooking and easy prep meal plan for next week!

Here’s to a great week filled with delicious meals!

...getting my life back on track

The Misguided Adventures of Fatman and Flabbin

Saving Gothem City One Pound at a Time

Vegan-Friendly Stories for all ages

Habits, purpose and a little bit of zen.